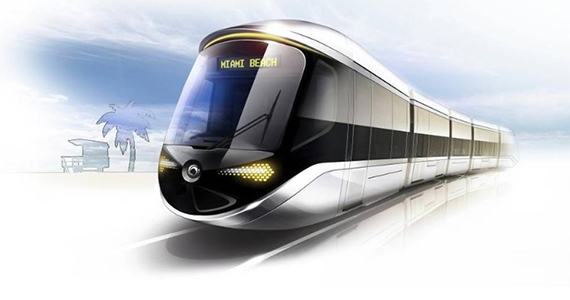 Three new stops for Virgin Trains. Genting proposes a monorail connecting Miami and Miami Beach. Warren Buffett’s Berkshire Hathaway is invested in the Chinese company that wants to build and operate the monorail. All of a sudden, Miami appears to be a rail town.

The city was once, when mangroves and jungle lay at the end of Henry Flagler’s rail line that ferried wealthy Northeasterners to Florida. The line extended to Miami where Flagler built the Royal Palm Hotel. The Florida East Coast Railway was an infrastructure project before people started using the term.

Fast forward 122 years and there are reports that Virgin Trains wants to add three stations in South Florida by the end of the year. Several cities in Palm Beach County want in. They have seen the number of riders increase, reaching 244,178 in the first quarter of 2019.

Other possible stops include the airports and seaports. Once the Palm Beach-Orlando segment opens, Virgin Trains could gain many riders stepping out of Disney World and onto cruise ships and airplanes. At this moment, no one knows where the South Florida stops will be added.

What is certain is that Genting, a Malaysian casino company, wants to bring to life the Baylink monorail. It would connect its Resorts World Miami site in downtown Miami to a new station at Fifth Avenue and Alton Road in South Beach.

Genting would establish a transportation center at its Miami property. That former site of the Miami Herald, would be a hub for corridor buses, a new Metromover stop, and trolleys that run up and down Biscayne Boulevard and nearby streets.

According to a Miami Herald article, local and state governments would pay about $240 million of the $400 million project. Genting and its partners would pay the rest. No federal funds, which can take years to procure, would be sought. Miami-Dade County would pay a private company to operate the system.

And that’s where Warren Buffett comes in. His investment fund owns 25% of BYD Motors of China, which builds monorail systems, electric cars and other means of transportation. BYD is partnering with Genting to be one of three bidders to construct Baylink and operate it. They gained that chance when the Miami-Dade County Commission voted on July 10 to accept the company’s proposal to created a bidding contest for construction of the light-rail system.

Should the plans move forward, will Miami-Dade residents, workers and visitors abandon their cars for a faster ride across the Intracoastal Waterway? When Virgin Trains announces the new stations, will drivers flee I-95 traffic jams when traveling north to Boca Raton or other popular transportation stops?

Tomorrow never knows, as the Beatles song goes. What’s clear is that alternate forms of travel are gaining public and political interest. We are approaching an era when faster services such as Virgin Trains and the proposed Baylink appeal to individuals who face long drive times to travel little distance. Hubs that move people quickly and efficiently from rail to bus to trolley. They can reduce the number of cars bogged down in continuous traffic jams and a chronic shortage of affordable parking. This approach can work well for long distances — Miami to Orlando — and short ones — Miami to Miami Beach.

The two plans also reflect the importance of the private sector in transportation innovation. Virgin Trains is privately owned, as is the Genting-BYD partnership. While local governments grapple with how to move people using taxpayer dollars, these companies think they can build and run it in partnership with public agencies. That may be the biggest news to come from the two developments.